My wife and I were celebrating our 25th wedding anniversary and began looking for a unique trip to remember. Previously forbidden for Americans, Cuba fit the bill and did not disappoint. In fact, it’s the best trip we’ve taken in a long time. 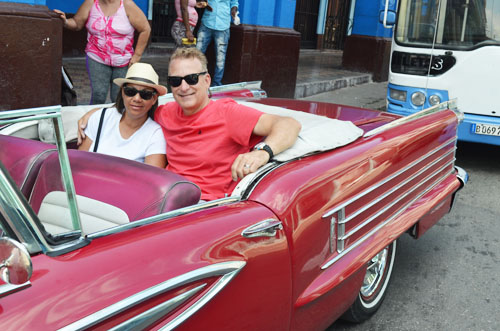 Cuba is the largest Caribbean island (about the size of Florida) and sits between Florida and Jamaica.

We elected to take a cruise from Jamaica (we spent a couple of days in Jamaica first) with Celestyal Cruises. The cruise took us to Santiago de Cuba, then to Havana, and finally to Cienfuegos. Because it was an educational exchange, we learned about Cuban history, the culture, the people, and the normalization process with America.

What made us want to go to Cuba? Until just 3 years ago, it was a forbidden land for Americans. Even now, the only way to go to the island is via an educational exchange tour where you learn about the history and culture of Cuba. I’ll talk more about Cuba history and why Americans were forbidden to travel there in an upcoming blog, but if you want to know more check out the Netflix series called The Cuba Libre Story. 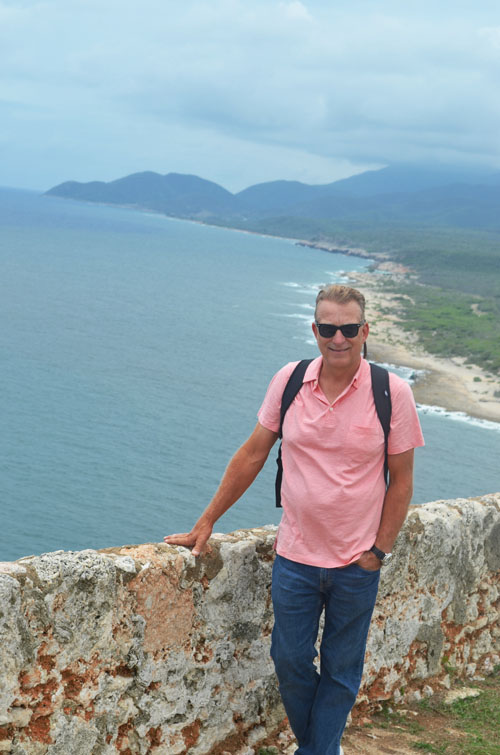 Havana is the capital of Cuba and the most vibrant city we’ve visited in a while.  It feels like a city stuck in time. Because of the American embargo, Cubans could no longer purchase American cars after 1960 so the streets are full of beautiful American cars from the 50’s and the buildings look like buildings you would have seen in 1960’s America.

Old American cars were everywhere. Not just a few — tons of them.

You can grab a taxi tour in an old car for about $40 an hour. Lynn and I took a 2-hour tour and thoroughly enjoyed it. Our drivers were 2 young men (23 and 21-year-old brothers) whose vintage car was handed down from their Dad. They took us to the major sites of the city and by special request, they helped us track down a specific type of cigar we were looking for (Montecristo number 2).

Before leaving for our trip, I had 10 people ask me to buy as many cigars as possible to share with them.  As you may know, we can’t buy Cuban cigars in the USA and that’s what makes them so special.

With cigars, you have to keep them in an environment that’s about 70 degrees and 70 percent humidity or they will dry out. Cuban cigars are not cheap — between $10 and $30 per cigar is the norm, so you don’t want to pay that kind of money and have them dry out.

I decided to purchase enough cigars to give to a few to friends and keep a few. You can bring back 50 cigars per person but I brought back 38. I also bought a few humidors to ensure that they kept to 70/70 for the temperature and humidity. That amount filled an entire backpack. In hindsight, I probably could have brought back 100 (50 for me and 50 for Lynn) and put them in a humidor once I got back to the states because it is humid enough in Cuba and they would not have dried up by the time I made it back.

I had never smoked a Cuban cigar before now. I did a bit of research and found that the most popular brand is Cohiba. They range in cost from $10 to $50 each, the ones I purchased were just over $20 each.

Another popular brand is Montecristo. In fact, Montecristo number 2 was voted best cigar in Cuba a few years back, so that intrigued me. The cost ranges from $10 to $30 per cigar. Finding the Montecristo number 2 became a challenge because they are so popular. We visited about 5 cigar shops before I finally found them so I purchased more of these than the Cohiba.

I’m not much of a cigar smoker and have only smoked a few cigars over the years. I’ve never had a good cigar before I found the Montecristo cigar and boy do I get it now. What a great cigar, it has a smooth taste, does not leave a bitter aftertaste and does not wreck your throat the next morning.

Ernest Hemingway lived in Cuba for over 10 years and wrote For Whom the Bell Tolls there. One of his favorite hangouts was the Floridita, the birthplace of the daiquiri. Lynn and I made our way there.

As we walked in, a Cuban band was playing latin music so we moseyed up to the bar and ordered a Mojito (a popular Cuban drink). The bartender said, “you sure you don’t want a daiquiri”?  Not thinking, we said “no” and the Mojito was great. Then we noticed everyone was ordering daiquiris and finally saw the sign saying that it was invented there. Wow, the best daiquiris we’ve ever had. One turned into two, two turned into three — you get the picture.

I hope you enjoyed this post on our trip to Cuba, keep an eye out for upcoming blogs on Cuba where I will explain more about the history and culture.

We found the Cuban people to be warm, inviting and full of passion. They love to dance and to spend time with friends and family. Even though they’ve gone through hardships economically and politically over the years, they take great pride in their homeland and are glad that relations with America are finally normalizing.

I’ll leave you with a final picture of the view we had as we entered the bay into Havana. 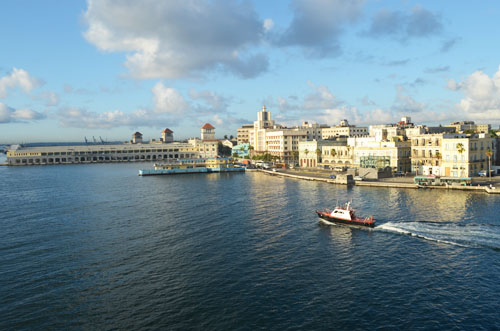