Spending 8 days in Paris gives you time to learn more about the culture and really see the sights. We first visited Paris in 2011 but were only here 2 days — it was not enough time to really see everything Paris has to offer. This time we took it slower.

5 Interesting Things We Learned in Paris

1. French people are warm and friendly.

2. The French smoke like cast members of Mad Men.

4. The French love to people-watch and socialize.

French People are Warm and Friendly

Many Americans think that French people are rude, pushy and not so enamored with us. We found this to be totally untrue. The French people we met were kind and eager to communicate. Even though we don’t know the French language, we tried to learn the basics (good morning, hello, goodbye, may I have the check please, etc.). That went a long way in greeting people and they seemed to appreciate our efforts.

The French Smoke like Cast Members of Mad Men

France reminded us of America in the 60’s and 70’s when most people smoked. In Paris,you can smoke in restaurants and pretty much anywhere else you wish. I think more people in France smoke than don’t.

Once you sit down for dinner, you sit next to French people chain-smoking for hours. We’ve joked that we are going to have black lung before we leave Paris, just from second-hand smoke.

It seems everywhere we walked, you would see skinny women. Much has been said about the women of France being skinny and it seems so. I can tell you that they are not on a low-carb diet because pretty much every meal involves tons of bread. Maybe smoking is the secret — they are all young and skinny because they don’t live past 50 due to rampant lung cancer.

The French love to People-Watch and Socialize

Almost every restaurant has tables facing the street. This is where the French congregate — to smoke, drink and socialize. They watch as people pass by and seem to enjoy the company of others. They are not on their iPhones when they socialize, they seem to really be enjoying the time spent with their friends. They also don’t seem to mind eating by themselves. It is common to see someone at a single table enjoying a beer and a cigar while watching passersby.

Tables face towards the street

They also eat late here. It stays light until almost 11 p.m. during this time of the year so we found that we ate dinner around 9 p.m. each night, just as the Parisians do.

We stayed in an apartment that was a couple of minutes walk from the Arc de Triomphe. It was a quiet street but in a great location to easily access all that Paris has to offer. 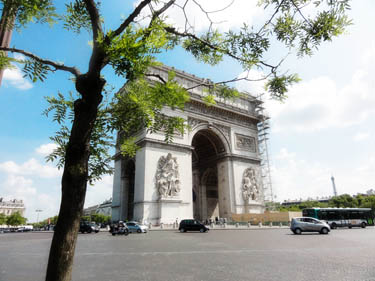 On the night that Algeria beat Korea in World Cup soccer, there were tons of cars blowing horns, flying Algerian flags, launching fireworks, and having a great celebration around the Arch de Triomphe.

Probably the most recognized monument is the Eiffel Tower. It can be seen from almost anywhere in town. We visited it at night — it twinkles at the top of each hour for 5 minutes — very cool. 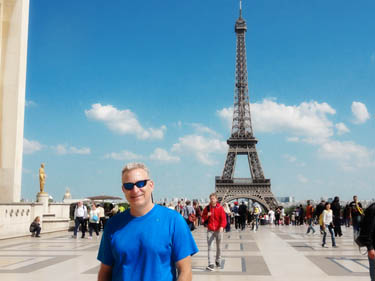 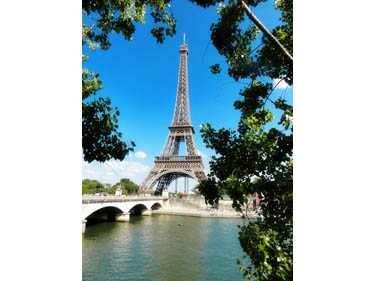 Ryan and I at the Eiffel Tower 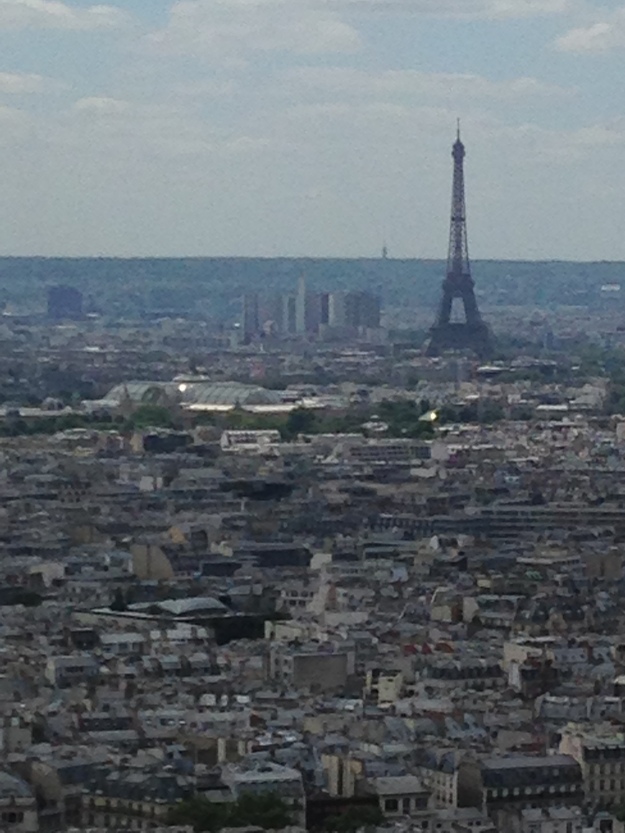 As we were walking to Notre Dame, we noticed a few bridges filled with locks. The story goes that couples put these locks on the bridge as a way to show their commitment. 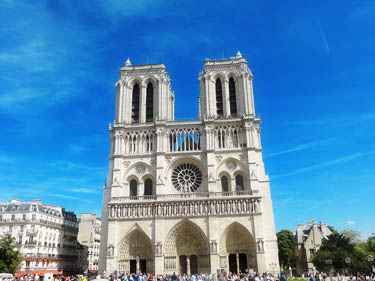 The best view in town can be seen from the top of a church called Sacre-Coeur. We climbed to the top (300 stairs) to take in the view. 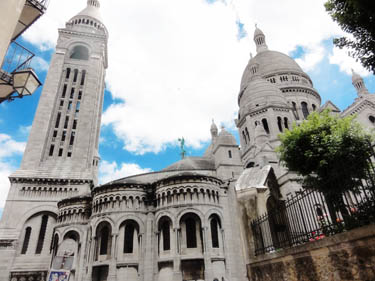 Sacre-Couer is in an area called Montmartre, we spent a day walking around this area and visiting the Musee de Montmartre.

Also in Montmartre is the Moulin Rouge. We saw a show here the last time we visited in 2011. 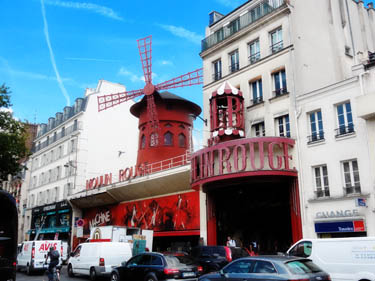 The Louvre is a place you must not miss — it is one of the largest museums in the world and where the Mona Lisa is displayed. We were surprised at how small the Mona Lisa painting is, but the Louvre is a must-see museum, you could spend days in there.

I will leave you with a few more pictures of the incredible architecture of Paris. 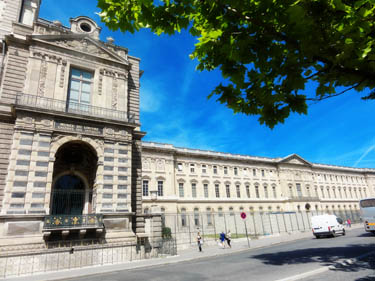 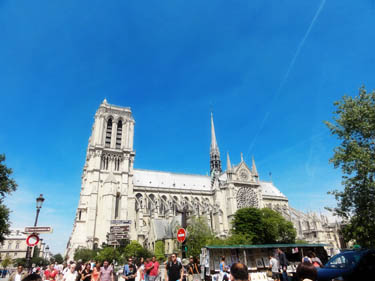 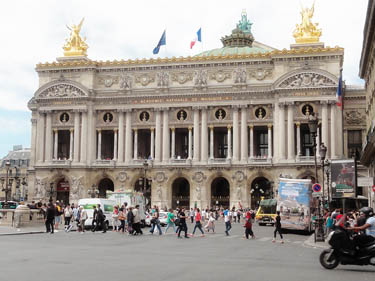 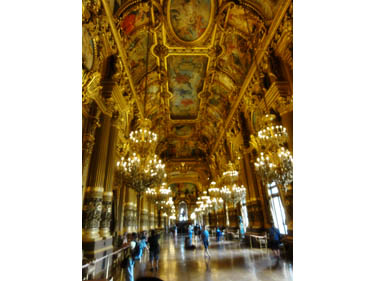 We ventured to the outskirts of Paris yesterday to visit some French Chateaus (Castles) and to enjoy wine tasting in the Burgundy region of France. We started our trip with a stop to Chateau de Chambord.

Building commenced in 1519 and took almost 30 years to complete. It boasts 440 rooms, 284 fireplaces, and 84 staircases. The cost to build the palace was equivalent to 1% of the French Gross Domestic Product!  It was fashioned after Italian Renaissance architecture and many believe that Leonardo di Vinci architected many of the rooms.

As you walk around the Chateau, your eyes drift to the King’s church.

Church along the side of the Chateau 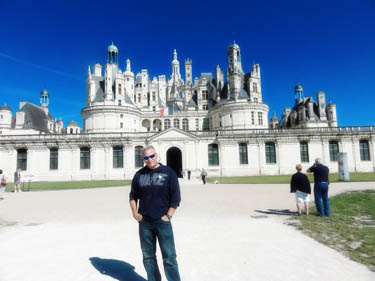 Back entry to the Chateau

Once inside the courtyard, you begin to appreciate the size of the Chateau.

Although an architectural marvel, it was not a practical design. The huge number of windows, high ceilings, and open terraces made the Chateau extremely cold in the winter.  It was built as a hunting lodge for King François I it was not used a lot because of the extreme cold. 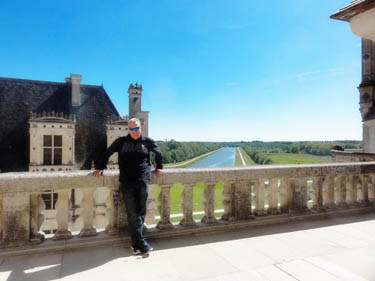 From one of the terraces

The King’s bedroom includes a viewing area where he would allow a privileged few to watch him awake each morning at 7:30 a.m. Once awake, the most senior of the viewers would dress him. He repeated this each night when preparing for bed.

Our next stop took us to Chateau de Nitray, another castle that also serves as a winery.  We were greeted by the owner of the winery and offered 2 glasses of wine and fresh salmon to nibble  on. 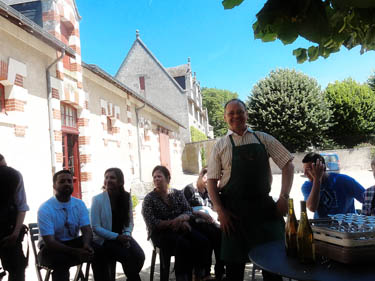 The Chateau is small compared to Chambord but doubling as a winery makes this a great place to visit. The owner was incredibly witty and we enjoyed an incredible lunch of roasted chicken, potatoes, tomatoes and apple pie. 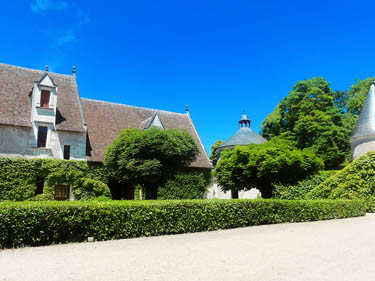 After lunch, he gave us a tour of the castle. He said every castle has to have a pigeon coup. The coup was used in earlier days to house thousands of pigeon for food and their eggs. Each cubby hole inside the coup represented an acre of land owned by the castle.

Our final stop was at Chateau De Chenonceau, a castle built on the River Cher in the 16th century.  Talk about cool views from inside the castle, the river literally runs underneath it. 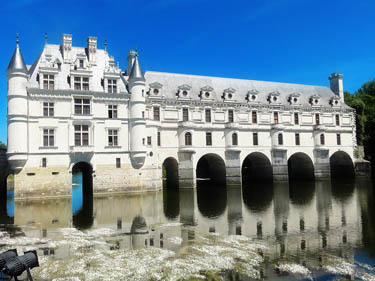 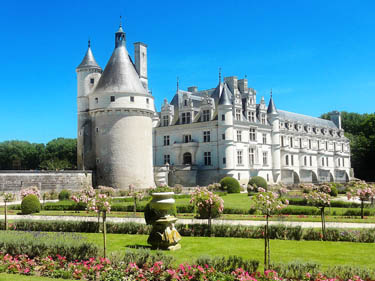 The grounds of the castle are just impeccable. They grow all their vegetables on premise and a working restaurant serves daily from the food grown on site. 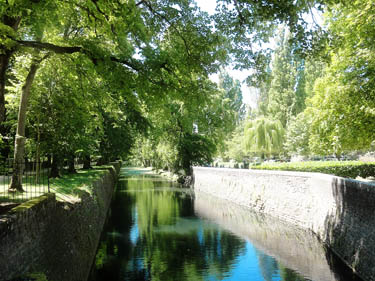 There are also small houses outside of the castle walls where the workers resided. I think any of us would love to live in one of these cool houses. 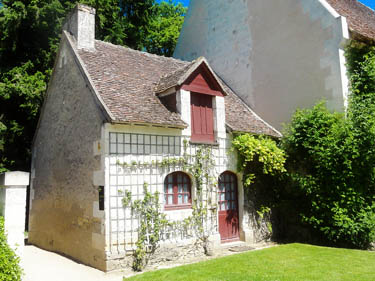 We finished our tour of Chateau De Chenonceau by visiting their underground wine cellar where we tasted the fruits of the vine. Spectacular!