After snorkeling the Great Barrier Reef, we boarded a flight for our next adventure. Below is our view as we descended into Sydney Australia. If you look closely, you can see the Sydney Opera House.

OK, maybe it’s not so obvious — I’ll help you out:

Speaking of the Sydney Opera House, it was originally bid at $7 million for construction but ended up costing $100 million.

It was supposed to be completed in 4 years, it took 14.

If you get a chance to visit, be sure to book a tour — they offer tours almost every hour. More than 8.2 million people visit the Opera House every year. The architecture will not disappoint.

Designed by Jorn Utzon, he was fired midway during the construction. Sydney did not appreciate or recognize his genius until many years later. Jorn was a bit difficult to work with and seemed to take vacations during critical junctions of the construction. He was reluctant to ask for help, didn’t have a plan for how to support the weight of his design before construction started. This led to his firing so he left Australia.

At the 1973 opening ceremony, Utzon’s name wasn’t even mentioned. He was banned from the Danish Architects Association. He never returned to Australia to see his masterpiece completed.

Fortunately, things started to turn around at the end of Utzon’s life. He earned the Pritzker Architecture Prize for the design in 2003 and the opera house re-named the reception room the Utzon Room in 2004. Apparently, that’s how long it takes for a project’s iconic importance to outshine resentment about its creator.

When we decided to travel to Sydney, the first thing my good friend Joey said was “I am climbing the Sydney Bridge”. He asked everyone else if they were in and I was the only one willing to do it. 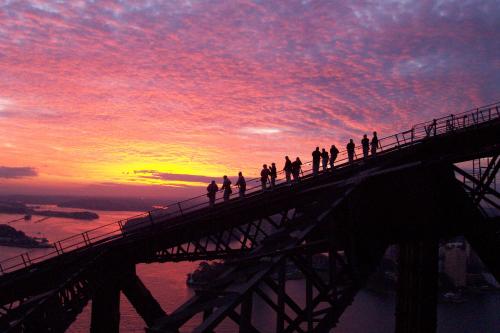 The bridge climb was started in 1989 when Paul Cave helped conduct a Young Presidents Organization World Congress in Sydney, which included a climb over the Sydney Harbor Bridge.

After the initial climb, it took Cave 10 years and millions of dollars of research to gain acceptance by the city of Sydney to allow the climb to be opened to the general public.

Before climbing, you spend an hour with personnel that go over all aspects of the climb and teach you to use the tethers designed to keep you safe. It gets quite windy at the top, so the tethers are a must.

Once you reach the apex, you get the best view of the Sydney Harbor.

Once the climb is complete, you earn a certificate!

While visiting Sydney, be sure to take a city tour — there is so much to see.  We saw the grade school that Nicole Kidman attended (it looked a little like Hogwarts from Harry Potter).  We also saw Russell Crowe’s home, can you pick it out below?

It’s the penthouse apartment with the yacht moored next to it.

Russell has a great view of one of the more iconic landmarks in Sydney – Mrs. MacQuarie’s chair. Located by the Royal Botanic Gardens, the bench known as Mrs. Macquarie’s Chair was carved out of sandstone in the early 1800s for Govenor Lachlan Macquarie’s wife, Elizabeth. It became her favorite spot to look out at the harbor and it served that same purpose for Lynn who took a moment to rest there.

A tour will also take you to Bondi Beach. Bondi is an eclectic township with a hippy vibe.

Bondi Beach has a beautiful beach area surrounded by an abundance of shopping.

Another popular spot is Manly Island — a short ferry ride from Sydney. We personally enjoyed Bondi Beach better but we happened to return from Manly Island at sunset and got a really nice surprise.

Sydney was preparing for VIVID — a festival held yearly that showcases light, music and ideas. During this festival, they light up the city in red, blue, pink, and purple. They were testing the lights for the upcoming festival and our ferry ride brought us back just in time for the display.

We also toured vineyards about 2 hours outside of Sydney. On the way there, we stopped by a nature preserve and saw kangaroo and koala.

We also saw my favorite childhood animal that I came to know watching Saturday morning cartoons – the Tasmanian Devil!

We saw Kangaroo in the wild several times. The last sighting was at a winery — they were just hanging out catching some shade from the vines. 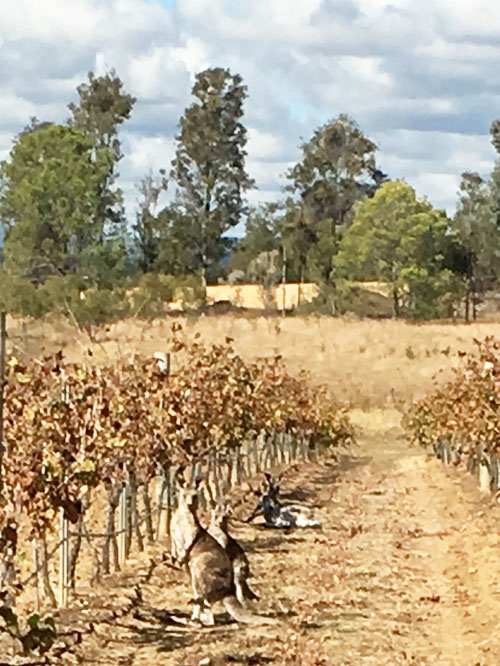 That wraps up our trip to New Zealand and Australia.  Keep checking back to follow our upcoming travel adventures.

I’ll leave you with a few of our favorite pics of the trip. 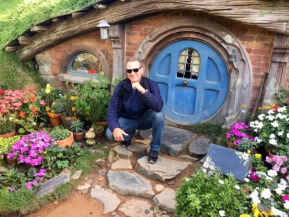 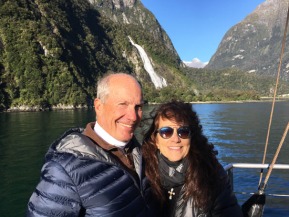 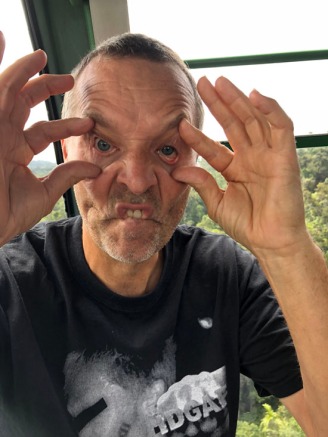 After an exhilarating trip to New Zealand, we turned our compass towards Australia to snorkel the Great Barrier Reef. Arriving in Cairns Australia, we followed a scenic highway to Port Douglas.  It was night, so we couldn’t see the ocean, but the hairpin turns along the coast kept us focused. We would make this trip several times during our stay, here is how it looks in the day:

Along this ocean by-way stands a rock-balancing area where locals and tourists express their creativity. Flanked by a beautiful backdrop, the rocks are endless.

Port Douglas is a hip town, with a nice marina and plenty of shopping and restaurants.

We rented a spacious house on AirBnB that offered luxury accommodations just a few miles from the town center.

Our focus for Port Douglas was snorkeling the Great Barrier Reef, we envisioned calm waters and endless reefs, something similar to this:

We were organized. A few months in advance, we signed up for the snorkeling trip, but the day before we arrived in Port Douglas, the trip was cancelled due to high winds and waves. The company we had chosen was worried about people getting sick on board, so they bailed on the trip.

Luckily, we had a few days in Port Douglas so we checked with some companies that had larger boats to see if we could make it out. We found a couple that were willing to go but they had a disclaimer about getting sick on the way out. Weather improved a bit but there were still 3-4 foot waves. We were determined to snorkel the Great Barrier Reef so we signed up.

The trip out was not nearly as bad as they had warned. It was a little bumpy on the 35 mile trip to the Great Barrier Reef but none of us got sick. You can see the choppiness in the water but that did not obscure the incredible views underneath.

Before the trip, my family bought me a Go Pro for my birthday. I was very excited to use it and it was working well.

I attached it to a head strap and as I swam from reef to reef I was anticipating the great video I would capture along the way. The reef at times was only about 3 feet underneath and at other times it was 25 feet below. When it was deep, I would dive deep to get up close to the fish down below.

After snorkeling for about 45 minutes, I surfaced to find that my Go Pro was no longer on my head!  Disheartened, I came back aboard and told everyone the news. All the Go Pro video I had taken during our trip would be lost!

Then word got around on the boat and the ship photographer said he had found a Go Pro in the reef! Exuberant, I was happy to find it was mine!  Later, I watched the video and could see the exact moment I lost it — I could see it come off my head and float to its resting place on top of the reef that was about 10 feet below!

Cairns is about a 1 hour drive from Port Douglas and we took advantage of visiting the Daintree rain forest. In Cairns, you hop on a gondola that takes you on a 2.5 hour trip over the tips of the rain forest. It has stops along the way where you can visit the rain forest up close. 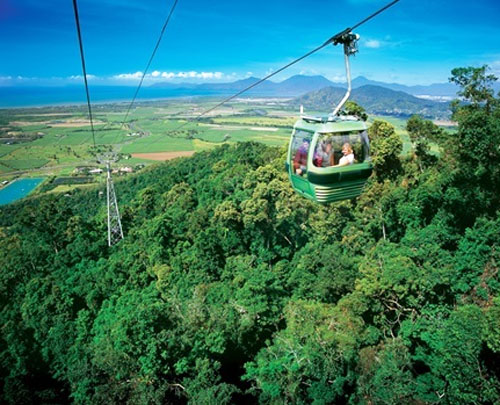 The end point is the town of Kuranda where you can shop, have cocktails or lunch, and watch the locals and tourists blend. To get back to Cairns, you board the Kuranda Scenic Railway where you will get a stones-throw view of waterfalls and incredible scenery.

Our next blog will take us to Sydney Australia where we will visit the world-famous Opera House and explore the city.  If you are not subscribed to our blog and would like to subscribe so that new posts come directly to your email, scroll up to the right top section of this page and type in your email address.

I’ll leave you with a picture of Greg and Kathy Tawes on our snorkeling adventure to the Great Barrier Reef. 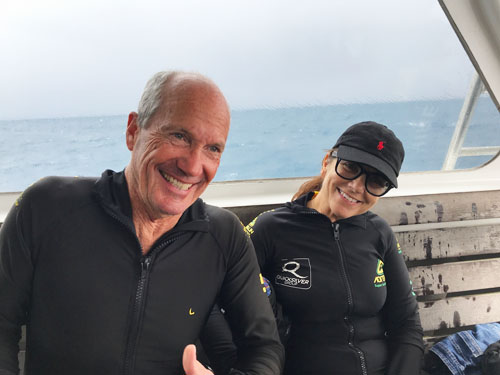