If you visit Cape Town South Africa, be sure to spend at least a day traveling around its southern peninsula. This is where you’ll find Cape of Good Hope, the tip of the peninsula, and you will be rewarded with incredible views of the Atlantic ocean. 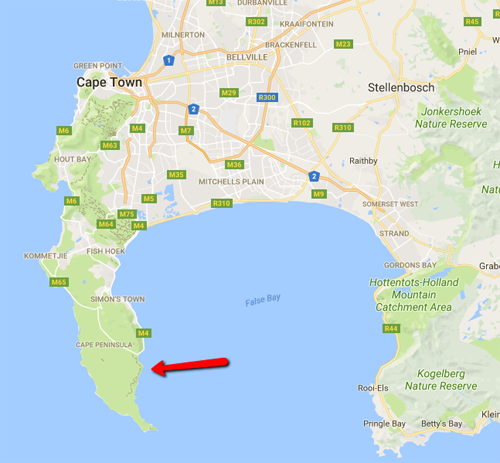 As we began our journey around Cape Peninsula, we stopped for a quick photo opp where you can see the outline of the shore.

One of our first stops on Cape Peninsula was Seal Island. You embark from a scenic marina at Hout Bay and make your way out to an area that is densely populated with seals.

Seal Island looks like a sea of brown debris but closer inspection illuminates dog-like animals barking at each other, stretching, and clumsily making their way along the rocks into the ocean for their next meal.

As we made our way to Cape of Good Hope, we found spots that give you a better view of False Bay. 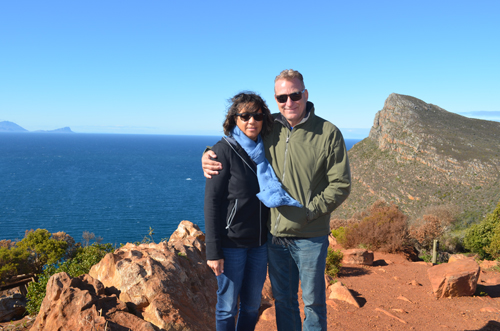 The southern most part of the peninsula is Cape of Good Hope. Along the way, you get panoramic views of False Bay.

Arriving at Cape Good Hope, you can grab a bit of exercise by climbing the stairs to the top of the lighthouse. They also offer a lift to the top if you prefer less exertion.

You’ll immediately be greeted by baboons that will happily accept any portions of food (feeding them is not recommended by the way). 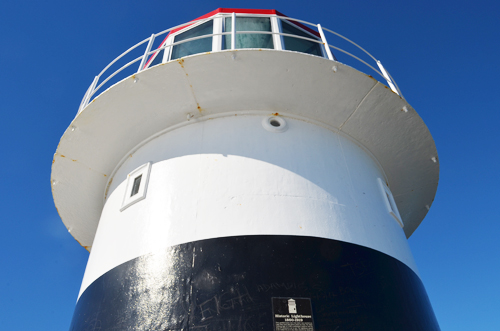 Once you make it to the top, you are rewarded with some really nice views. 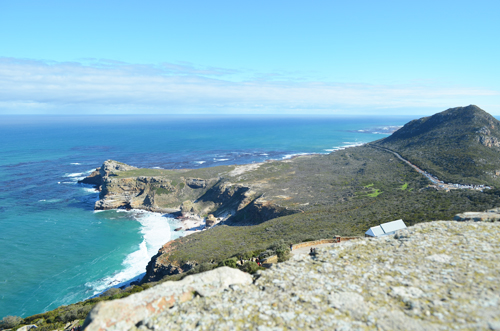 As we left Cape of Good Hope, we saw an ostrich just hanging out by the coast, that’s not something you see every day. 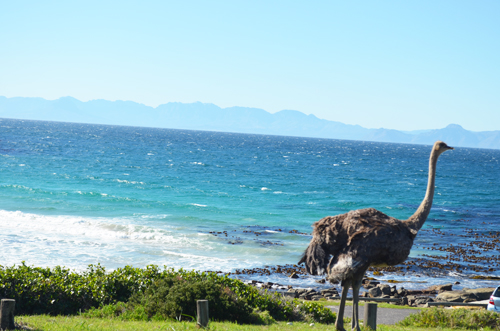 So what’s dressed to the nines but is on the extinction list? African Penguins!  As we made our way towards Simon’s Town, we came upon an interesting road sign. Not sure I’ve ever seen a sign like this before.

Nestled in a sheltered cove between Simon’s Town and Cape Point is a safe haven for African Penguins called The Boulders. It all started in 1982 when a pair of penguins made this area home and the population has catapulted to over 2,200 penguins.

Here are a few facts about these penguins:

Our final stop around the peninsula was to Kirstenbosch Botanical Gardens. Not as impressive as Buschart Gardens in Canada, but if you like plants, trees and anything that flowers, it is worth a look. 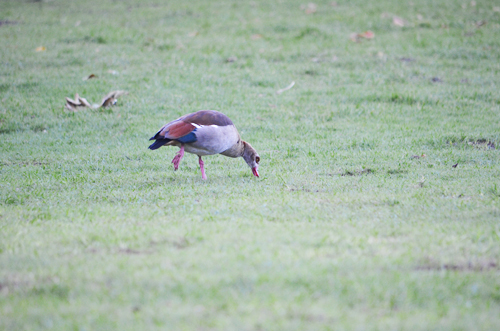 The Cape Town wine country is worth an entire day of exploration. In fact, had we known ahead of time, we would probably have stayed a few days in Stellenbosch, the focal point of wine country.

The architecture is very Dutch, with white buildings set with beautiful mountains as a backdrop.

We live just off scenic 30-a, a coastal highway close to Panama City Beach, Florida. Only a mile into 30-a, you come to a beach community called Alys Beach. Below is a picture of houses from Alys.

Here is a picture of a house in Stellenbosch. See any similarities?

During our wine tour, we visited several wineries including Waterford, Roca and Anura. We also stopped for lunch in Franschhoek at the Dieu Donne winery. If you are in the area, I highly suggest having lunch here, it is incredibly scenic, surrounded by colorful mountains.

This was also the first place I tried ostrich steak. You would think it would be white meat, similar to chicken but no so. It is red meat and tastes like a filet mignon. If you get the chance to try it, I highly recommend it.

Most wineries are set on sprawling lands of mountain valleys. As we drove up to our first winery visit (Waterford), this was our entry. 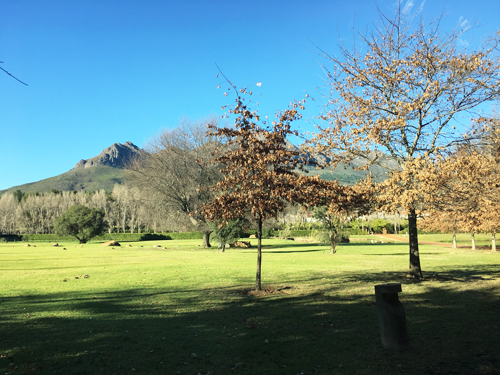 As we got closer, we could see our host awaiting us at the door. 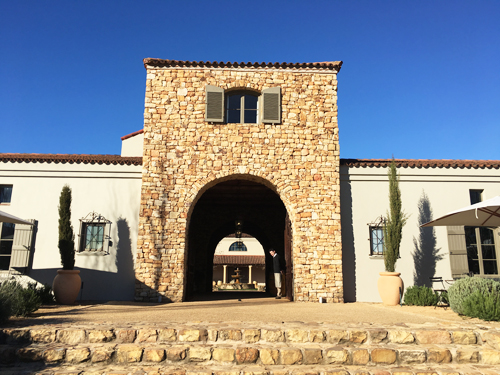 We sipped on whites and reds and enjoyed the best of South African wines.

I hope you enjoyed this post on our trip to Africa. If you missed any of our other posts on Africa, you can see them here.

I’ll leave you with a final picture of the menu we saw at a restaurant. You can choose from a list of wild game that they serve in South Africa. Would you be bold enough to order any of these?