After months of planning, we embarked on a 3 week trip to New Zealand and Australia. Joined by great friends, Joey/Mala Steffen and Greg/Kathy Tawes – it was an adrenalin pumping trip we won’t soon forget. We zip-lined, rode jet boats, climbed the Sydney bridge, took a helicopter ride to the top of a glacier, cruised fjords, petted snakes/kangaroo/koalas and visited over a dozen wineries.

Our trip was so action-packed, I will chronicle our travels over 9 blogs so stay tuned each week to continue following our journey. You may have found this post from the title “In search of face tattoos in New Zealand“. What’s that about? We met a group of people whose social status is elevated upon getting a face tattoo. More about that later.

We visited both the north and south islands of New Zealand but started in the north in Auckland. A waterfront city, Auckland has about 1.5 million residents — the largest city in New Zealand.

Auckland illuminates at night with a vibrant vibe beckoning to be explored. As we walked the waterfront, we saw huge yachts and sailboats moored in the harbor. 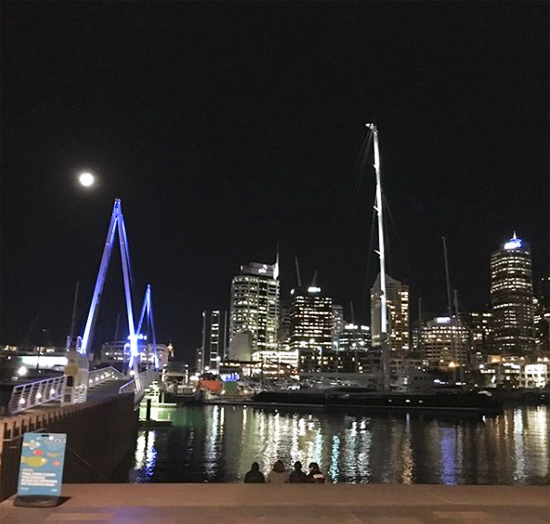 Just a short boat ride from Auckland is Waiheke Island — ranked as the fourth best island in the world by Condé Nast.  Although the island has lots of scenic beaches, our focus was wine. Showcasing more than 25 wineries, we spent the day sampling their coveted sauvignon blanc.

A couple of hours north of Auckland is the Bay of Islands — an island that is world renowned for big-game fishing.

From Bay of Islands, we cruised to Piercy Island to witness the “Hole in the Rock“. Piercy Island was named by Captain Cook in honor of one of the Lords of the Admiralty.

After visiting Bay of Islands, we explored more of the north island of New Zealand stumbling on the Waipoua Forest — the home of the oldest and largest Kauri tree known to stand today. Estimated to be 2,500 years old, the tree is named Tāne Mahuta, a Māori name that means “Lord of the Forest”.

In Search of Face Tattoos

As we began exploring New Zealand, we heard about the indigenous people — the Māori.  New Zealand was not inhabited until around 1250 when a Polynesian tribe came to the island via canoe. The Māori formed tribal groups with their own unique culture and language — a language that is still spoken today by over 600,000 tribe members that still occupy New Zealand.  We heard rumors that some Māori sported face tattoos, but we had yet to see it.

As we drove the north island, we stumbled on a beautiful spot that flanked the Tasman Sea. We stopped to check out this beautiful pier that jets into the bay. 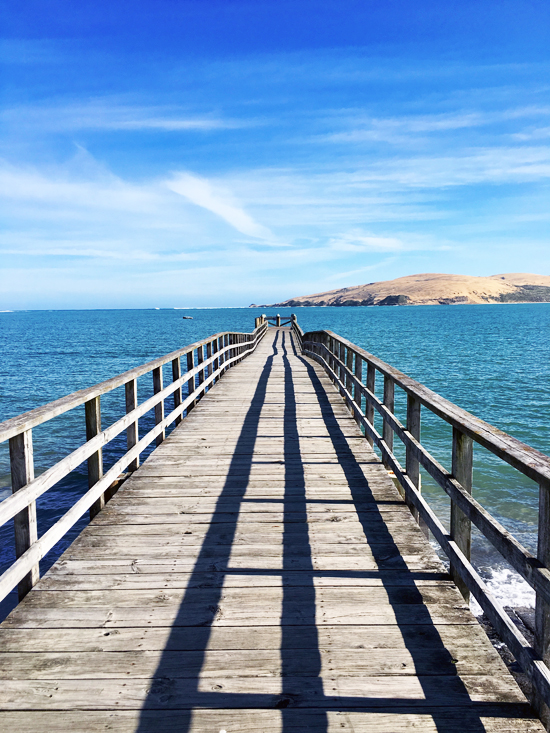 As we were leaving the pier, Greg noticed a little cafe a short walk away so we decided to explore. To our surprise, it was a hotel and cafe that was hosting a Māori council meeting. When we arrived, we were greeted by a Māori woman who was one of the leaders. She welcomed us, kissed each of us on the cheek and we had a cocktail. Soon after, another Māori gentleman approached us and began to explain more about their traditions and the reason for the face tattoos. 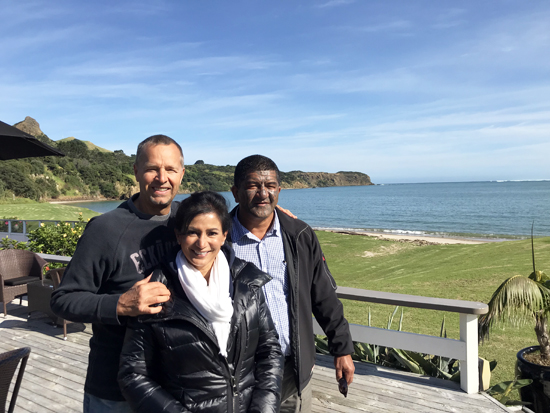 The Māori tattoo is an important aspect of this native society, linked with ancestry and rank within the tribe. Originally, the tattooing instrument was a bone uhi (chisel) with an extremely sharp straight edge which caused deep cuts into the skin. Once finished, the skin had grooves.

Liquid food and water were drained into a pipe made of wood to ensure that nothing dirty came into contact with the swollen skin. The full faced tattoo was very time consuming and a good tattoo craftsman would carefully study a person’s bone structure before starting the procedure.

Today, tattoos are not performed with bone but with needles (as we are accustomed to). The gentleman above explained that the forehead part of the tattoo is the wing of a bird, the nose is the beak, the chin is the mouth of a bird and the left cheek represents the person’s father and the right cheek their mother.

As we continue our New Zealand journey, you will learn more about the Māori people.

Our next blog will take us to a Māori village, a glow worm cave and zip-lining over a rainforest.

I’ll leave you with a picture of our beautiful friend Kathy Tawes, as she enjoyed the little cafe we stumbled on when we met the Māori council members that were so nice to us. 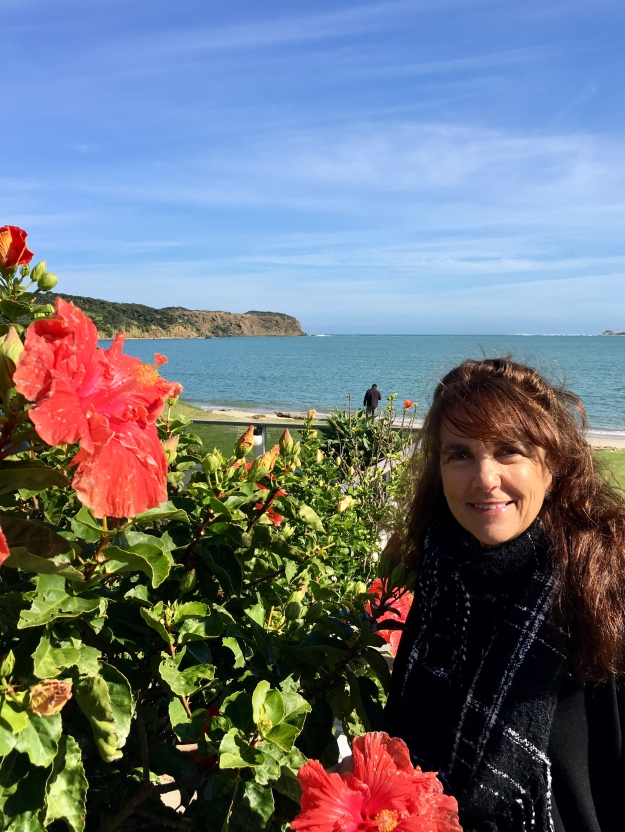